The report found that, on average, internet users spent almost four hours online daily, with 73% of this time spent on a smartphone. So what were individuals doing with this time?

The research showed that Whatsapp was the top used smartphone app in all age categories (15-34, 35-54 and 55+), closely followed by Facebook. 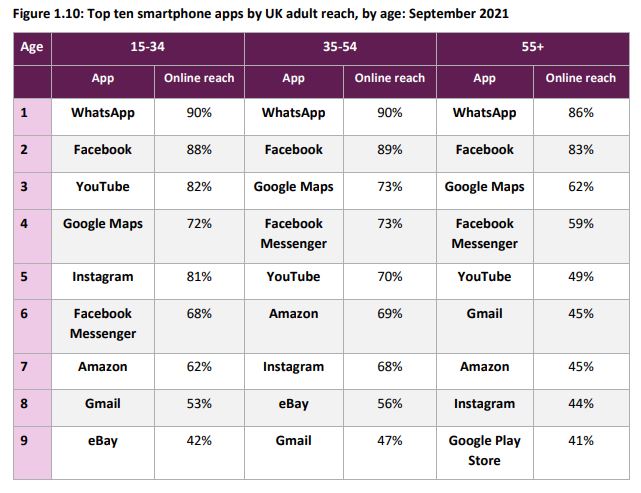 In 2022 social media experienced a steady growth with the reach of the top ten platforms having all grown since Ofcom’s 2021 Report. This growth shows that the use of social media has continued to expand, and internet users in the UK are more likely than ever to have a profile on at least one platform.

Facebook and YouTube were found to have an online reach of over 90%+, with Instagram reaching 73% and Twitter reaching 62%.  Other apps such as LinkedIn, Pinterest and TikTok were found to have reached 30%+ of internet users. Rounding out the top ten most used platforms were Reddit, Snapchat and Nextdoor, which have below a 30% reach but all boast millions of daily users.  Facebook is by far the most used platform in terms of daily users, reaching 34.3 million individuals on average per day.

Other high-ranking usages for the internet were news sites, such as the BBC, the Sun and the Mirror; personal finance sites such as PayPal, Barclays and Nationwide; email services such as Google Gmail, Microsoft Outlook & Hotmail and Yahoo Mail. Areas with lower reach included online dating apps and cryptocurrency apps.

The report highlighted that in the post-covid world, internet usage is higher than ever, with more and more services being provided online. Activities that were previously offline such as socialising, financing and shopping have managed to become highly online activities, with much of this accelerated by the pandemic. In 2022, an adult in the UK is likely to have multiple social media profiles, messaging platforms, online retail accounts, news apps and personal finance apps. If online trends continue, in 2023 it is likely that the online reach of all of these services will expand and a higher proportion of adults in the UK will interact with the online world on a daily basis.

“As online technologies and services become more embedded in people’s day-to-day activities and habits, it is increasingly hard, and increasingly less meaningful, to draw a distinction between online and offline life.” - Online Nation 2022 Report