Perfect on paper: the prevalence of fake qualifications and their impact

In the modern age, having a degree opens doors.

For employers, a degree is a real, tangible piece of evidence showcasing a candidate’s experiences and indicating their potential in a work environment. In many fields, holding a specific degree is a fundamental requirement in applying for work. Having a degree is a great asset for would-be employees. However, as necessity implies, it is also a disadvantage for those who don’t.

The value of a degree is well-known, and as higher education has become more accessible, the percentage of those either studying towards or holding a degree has increased in tandem. In 2018, 27% of 18 year-olds in the UK received offers to study at universities across the country. But for those who did not, an illicit market exists to bridge the gap: the fake degree market.

Pakistani software company Axact made headlines in 2015 when an investigation by the New York Times revealed the company to have earned ‘millions’ of dollars through selling fake degrees, resulting in an investigation by Pakistan’s Federal Investigation Agency and the arrest of 25 employees. A following New York Times report from on the scandal in 2016 revealed the company to have sold at least 215,000 people in 197,000 companies. In 2013 and 2014, over 3000 of these qualifications were sold to U.K. based buyers, including master’s degrees, doctorates and PhDs.

At NetWatch we decided to conduct a brief OSINT investigation into the different companies out there offering these fake qualifications. Using Google alone, we found a vast array of suppliers readily available, proffering fake degrees for those unable to secure one through the conventional route. One company, based in China, was found to be advertising fake degrees from British universities for as little as £600. Being competent in Mandarin (and feeling the urge to shake off the rust), I posed as a potential customer and got in contact with the company’s sales representative, a lady named ‘Ruby’, to see how easy acquiring one of these qualifications could be. I decided to see how easy it would be to get one of the most prestigious degrees available – a Master’s Degree in Law from the University of Oxford.

As it turns out, it’s very, very easy.

As you can see from our conversation below (original on left, translated on the right), Ruby was more than happy to offer this specific degree, along with asking which college I ‘attended’ and what year I ‘graduated’ in order to really add the finishing touches. All for the low, low price of £650. 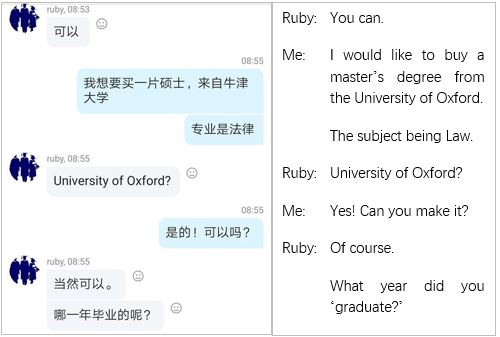 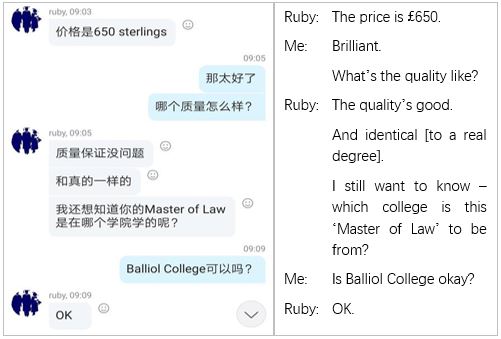 Following this question, I probed for guarantees from ‘Ruby’ regarding the quality of her degrees. How could I, as a customer, be assured that my fake wouldn’t be immediately outed as such by an eagle-eyed would-be employer? In response, she offered testimonies from previous customers and – interestingly enough – a short video of her workplace, where fake qualifications are manufactured en masse for sale across the globe. The video showed shelves packed with blank qualifications, just waiting for the details of any given customer to be printed on them, as evidenced by the snapshots below: 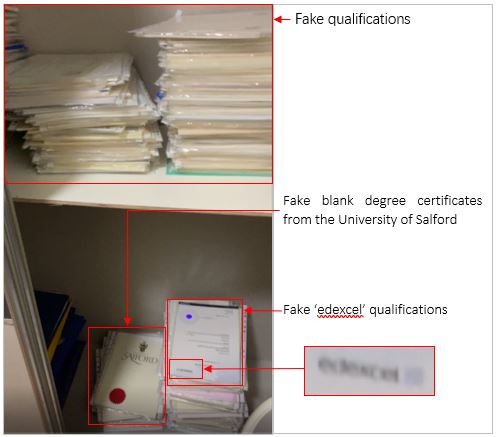 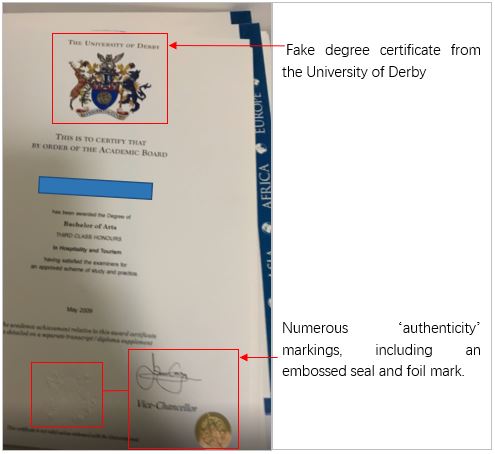 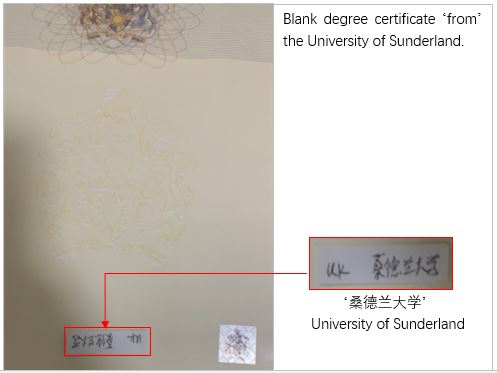 These fake degrees and qualifications, through their details and incorporation of ‘authentic’ features such as embossed symbols and holograms, look convincingly real. Qualifications such as those offered by Ruby could easily be added to a CV, and hey presto. Suddenly you have a Master’s Degree in Law from Oxford.

With the ‘postgraduate premium’ of a master’s degree adding approximately £5,500 to an annual salary – over £200,000 of added lifetime earnings over a typical 40-year career – the carrot, for some, is mightier than the stick.

As such, several headline cases have been reported regarding unqualified individuals who, using fake qualifications, have successfully applied for work. Natural consequences followed – in 2011, a Willenhall woman was arrested after using a fake dentistry degree to successfully apply for work within hospitals across the U.K. An investigation into her credibility was commenced after an incident where, when performing dental work on a patient, she had removed the incorrect teeth. Zholia Alemi, a former clinical psychiatrist with the NHS, was found guilty of having obtained her job through use of fake qualifications purporting to be from the University of Auckland. She had worked in this capacity for 22 years.

The impact on businesses hoodwinked by fake qualifications is immense. In the case of Zholia Alemi, the NHS had lost over £600,000 through hiring an unqualified candidate. Finances aside, a company’s reputation is also at stake by those found to have hired unqualified candidates, and as consumer faith falls, so does a company’s revenue. A 2014 survey by Higher Education Degree Datacheck (HEDD) revealed that one third of employers never check an applicant’s qualifications, representing a significant risk.

As part of the NetWatch employment screening and vetting process, we can look to validate qualifications and as such any suspicious ‘degrees’ are easily flagged by NetWatch in our new Pre-Employment Screening (PES) process.

Through the use of this service, organisations have seen a 35% increase in the ability to recognise candidates lying about their qualifications, experience and attitude. Beyond peace of mind, knowing a candidate’s qualifications and experience to be authentic represents a significant financial saving, and safeguards brands against fraud and reputational damage.

To find out more about how our Pre-Employment Screening service and how it can benefit your company, click HERE