Back in October 2019 the England men’s football team played an international qualifier against Bulgaria. During the match, a section of Bulgarian supporters racially abused several black English players, with images of the abuse transmitted around the world for all to see. We used OSINT techniques to find out more about who these people were…

Back in October 2019 the England men’s football team played an international qualifier against Bulgaria. During the match, a section of Bulgarian supporters racially abused several black English players, with images of the abuse transmitted around the world for all to see. We used OSINT techniques to find out more about who these people were…

The supporters concerned performed Nazi salutes and directed racist chants at the players. The game was stopped in order for a message to be conveyed over loudspeaker to the Bulgarian fans that the game would be suspended and abandoned if the abuse continued. The game was subsequently stopped for a second time, however the players, staff and referee eventually agreed that the game could continue as the main group of abusers had by that time left the stadium. 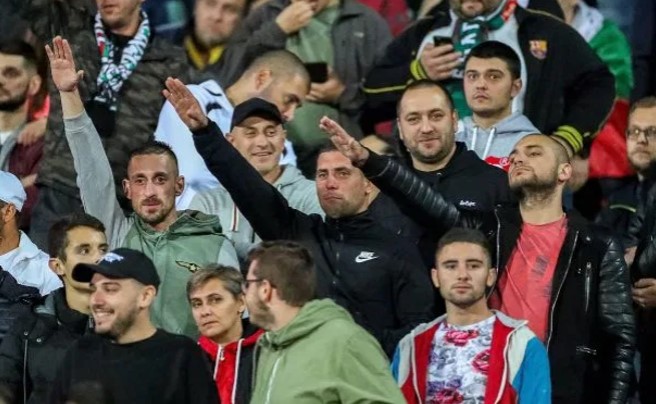 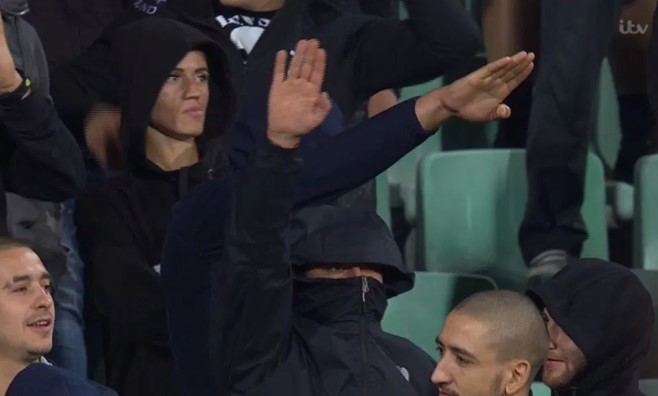 But who were these individuals? Were they regular Bulgarians or part of a more organized group? Somewhat thankfully, it appears that the main section of abusers are not representative of Bulgarian society at large, and are in-fact members of the group “Lauta Army”, who are hardcore fans (known as ‘ultras) of Sofia-based Lokomotiv Plovdiv football club. Indeed, during the match a banner bearing their logo could be seen in the section of the stadium from which the majority of the abuse was emanating. 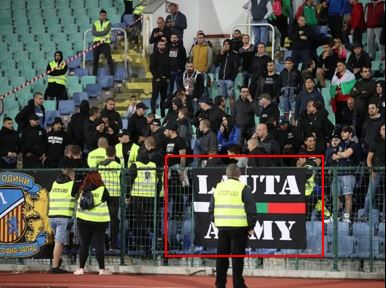 The group is active on social media, and operates both Facebook and Instagram pages. The Facebook account was briefly taken down following the controversy, but has now been reinstated. The account mostly uploads posts concerning its members’ fights against ultras of other clubs: 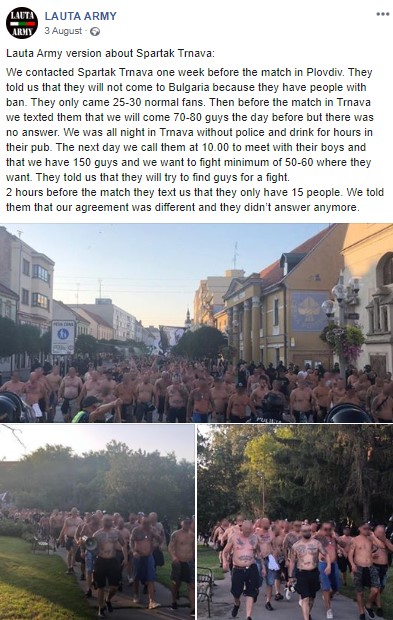 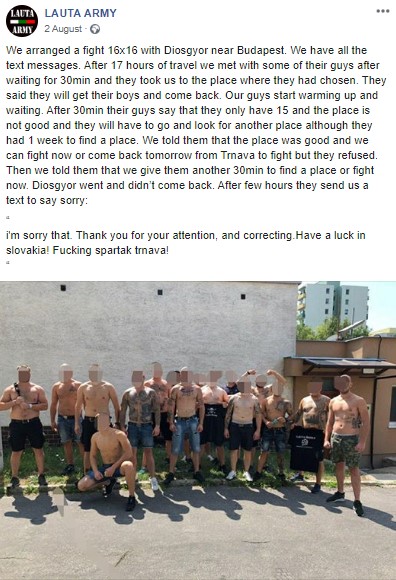 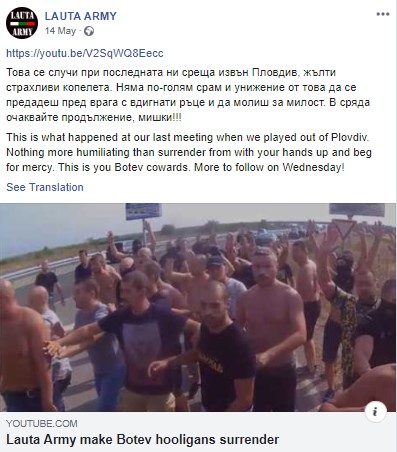 Prior to the match the Lauta Army Facebook page posted that they were indeed attending, and even that they had arranged to fight a group of English fans, which apparently did not take place. 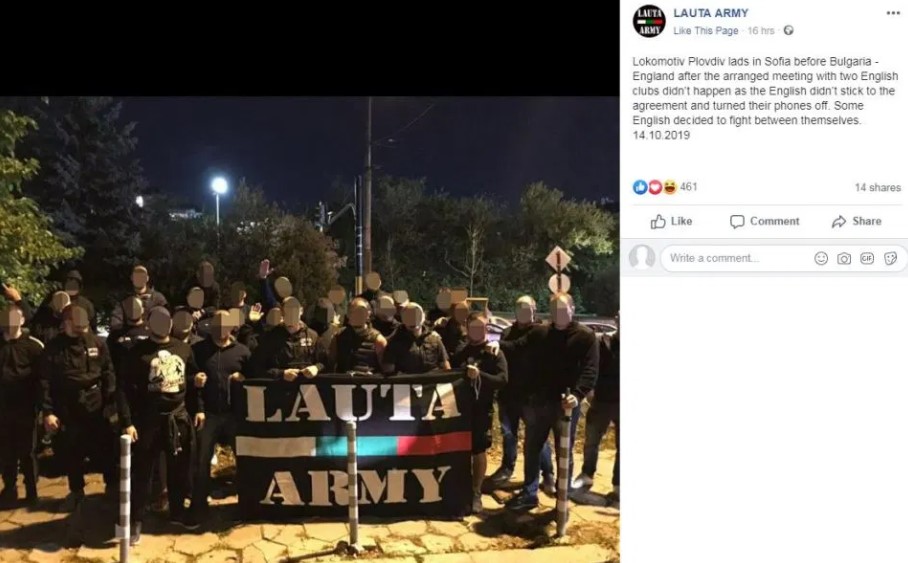 Of most concern to Bulgarian authorities will be that the Lauta Army Instagram account contains several references to Nazism and Neo-Nazism. For example, the Nazi symbol ‘14/88’, 8814, 1488’ is used either in their account names or in the posts of many of the account’s followers This symbol refers to the initials in the Nazi slogan Heil Hitler, with each number attributed to the letter’s position in alphabet; A equating to 1, H equating to 8, etcetera.

Other followers of Lauta Army use the slogan ‘1312’ in their account names, which is the numerical version of the acronym A.C.A.B. meaning “All cops are bastards”, frequently used as a Neo-Nazi symbol in Slavic countries, whilst others followers use the letter H in Fraktur script, either in their account bio or in their posts. The Fraktur script was used by the Third Reich and is the de-facto script for Neo-Nazi slogans. The stand-alone letter H in this script refers to Hitler. Moreover, several followers used Nazi imagery such as the Iron Cross or the Third Reich flag in their posts and profile pictures, and one account used the phrase Gott Mitt Uns, a phrase emblazed on the belt buckles of Wehrmacht soldiers during the Second World War.

Whilst some of the followers of Lauta Army were more brazen in their use of Nazi imagery, for instance employing a swastika for their profile picture, the majority used the aforementioned methods of indicating Neo-Nazi affiliation, whilst still remaining inconspicuous to the casual observer.

An example of the more brazen Neo-Nazi leanings of the Lauta Army followers can be seen in the image below, which depicts a photoshopped image of Adolph Hitler laughing whilst viewing the abuse on television.

It is possible to identify several individuals from the Lauta Army who were likely to have attended the game, including one account which had uploaded two videos of Lokomotiv Plovdiv fans chanting during the game. This account also uploaded an image of an anti-Uefa logo, which had been brandished by Lauta Army hooligans at the game, and an image of a skull and cross bones with the text “Локо или Смърт”, meaning Loko[motiv Plovdiv] or Death. Snapshots of these videos and images can be seen below and overleaf. 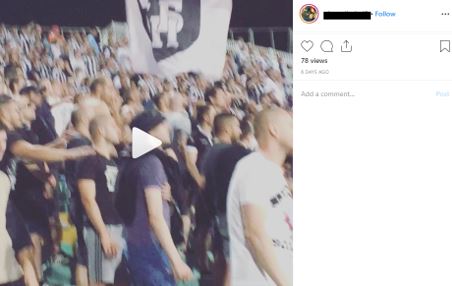 Following the events of the game several people were arrested by the Bulgarian Police Force, with many of those arrested already known to law enforcement. However, it is sadly clear that the abuse could have been prevented if authorities had been pro-actively monitoring the social media channels belonging to the Lauta Army, and indeed the accounts of other ultras groups operating within Bulgarian football. If they had done so, they would have been able to identify a majority of the individuals planning to attend purely with the intention of spreading racist abuse, and could have cancelled their tickets or issued a stadium ban.

Get started with ToolSuite for free

Book a demo to start discovering the benefits of our OSINT ToolSuite hub. Gain instant access to a range of proven tools for conducting expert online investigations on one browser-based platform.